This is my new site!!! I have absolutely no idea how to use word press, so just trying to work it out as I go along. It turned out you have to pay if you want some colour or anything remotely nice on it. Hopefully it will get me going again. But I wouldn’t bet too much money on it.

I thought I’d start by updating on the fun we’ve had this week at the library. The band Everything Everything colonised Manchester Library with theatre, comedy, music and literature, all exploring the theme of chaos to order. Above is Josie Long, who performed on Tuesday to a full audience. I’d got my a ticket last minute and was confused between Josephine and Josie Long, and was expecting her to start singing. But she didn’t.  Instead, she was very, very funny. She has managed to convince most of the audience to help her stop Farage winning a seat in her hometown. Her plan is to  by organise thousands of people to move there for the election, and then all vote Green. But don’t tell the Green candidate, mind. No, let her think she will lose again, and have a lovely surprise. Then we can all leave afterwards.

Emma Jane Unsworth was the writer in residence, terrorising people in the cafe each lunch time by reading Frank O’Hara poems, appearing on Radio 6, which was recorded there today, and organising the Manchester Fiction Showcase. I was in that one, with Chris Killen, reading from his second novel, as well as Kerry Wilkinson, children and crime writer from Preston. None of us had met him before but he has about fifteen books in the pipeline. Kerry gave a powerpoint (who doesn’t like a powerpoint?) on the writing process and chaos prior to publishing, including email exchanges with his agent. Chris Killen was profound on the meaningless of existence. I read an excerpt from my new novel. It’s the bit I’ve read a couple of times this summer but tbh the rest of my novel is a bloody mess. I had another bit to read on being a communist but I paused, and thought ‘I could just get off this damn stage right now’. The event had overrun a bit and this was all the excuse I needed. Emma read from her new novel. A brilliantly witty teenage girl. Can’t wait to read more.

Last night Josephine presented ‘Celluloid History Films’. Songs composed to films produced by Kim May from footage from North West Films Archive. The films were of working class people at the beginning of the century having fun, on days out to Blackpool, dancing and generally finding a bit of chaos in very ordered lives. I can’t quite describe how beautiful they were. Utterly spellbinding. As soon as the first song began I started crying. But then I cry at most dog videos on youtube. Here you can see one of the images, but they were also projected onto two of the walls. I think Josephine is going to perform them elsewhere. Just thinking of it makes me teary…. 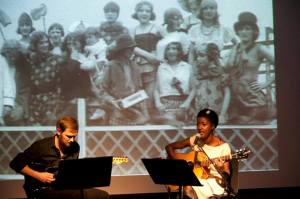