Last year I started a full time post at Lancaster University, and have been working on my next book, and it kind of feels I haven’t done that much, but if I list things can see I’ve not just been spending my time, lying on my couch an stroking my infamous cat. Here’s a few writing things I’ve been up to:

I gave an evening address and ran a workshop at Swannick Writers Summer School because they liked my post on ‘how much wine to drink before an event’. This is a photo of the participants busy doing a writing exercise in the workshop and a photo of some peas we had at dinner. 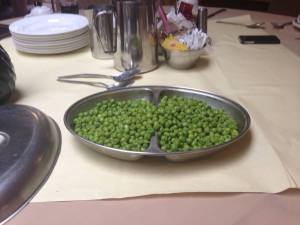 I ran two creative writing workshops for PEN/Help for Heroes. PEN has started a new initiative of running CW workshops at Tedworth House with soldiers who have returned from Afghanistan and are recovering from wounds and trauma. The sessions were difficult but very rewarding. I’ll write another post about the workshops and therapeutic writing. After the first session, Tedworth House and the soldiers sent me a lovely thank you card.

I also attended the TRUCE workshop at the ECAL Conference in Sicily. I got together with scientist Andy Philippines to write my story, ‘Key Note’ for the Beta Life anthology. This story is about a pair of scientists who decide to experiment on their children by making them into a kind of ‘hive mind’ or collective intelligence. Andy’s research is possibly the most benign things ever done to ants in a lab (they live longer than in the wild) but my story is pretty dark, and written in the voice of a scientist in 2070. I haven’t gone easy on the science so I’ve offered a pint to anyone who can finish it.

Last year I hosted the Manchester launch of Sylvia Pankhurst: Feminist, Socialist, Scourge of Empire at the People’s History Museum. An excellent biography of an amazing revolutionary life. She was always at odds with the politics of the day, always two steps ahead. Catherine Connelly is also a wonderful speaker, historian, and activist. Yeah, she’s great.

An equally impressive writer, activist and journalist is Tansy E Hoskins. I hosted the Manchester launch of her first book: Stitched Up: The Anti-Capitalist Book of Fashion. Tansy interrogates the relationship between the fashion and the planet and our bodies. She asks why  nothing has changed since the Rana Plaza disaster, and asks what hope there is for rebelling against it. Does ethical fashion work? Tansy is an inspiring speaker. It was great to meet her. Tansy is one to watch.

I managed a few readings from various drafts of my new book, and from The War Tour. I read at Arvon’s Lumb Bank. It’s such a beautiful old house, I want to live there always. I especially enjoyed the event with Withington Girls High School. One of them will hopefully end up as Prime Minister. They asked the most astute and insightful questions about The War Tour that I’ve ever had. Last week I went to the school to talk to them about WW1 alongside speakers from the Peoples History Museum and Manchester Art Gallery. I was pretty nervous about this event, but in the end there was not much time for me to speak. But I might go back again soon.

Last year I went to London (the SOUTH! Exciting!) to read at What’s The Story run by Cathy Galvin at the Society Club Shop Soho. This was a cosy venue, and a lovely, warm night. I also read at Manchester’s Bad Language, then the annual Manchester Book Market, which promotes independent publishing in the NW. Then World Book Night and a one off of classic the Manchester night: No Point Not Being Friends. That was more than enough readings. I find it hard to read from work in progress. It can go so wrong. But it can also be a great testing ground for new work, and the recent events have really encouraged me in my new book, The Quiet Longing. This book has not been easy to write, but for reasons I’ll explain, for me, really needs to be written.